Sheryl and I recently travelled to Spain for a holiday, and during the trip, we decided that we should start writing about our trips, in the hope that:

The aim is to eventually write about some of our past trips as well: Hong Kong and its outdoors (which many people are unaware of), Ijen, Bromo and Ho Chi Minh.

Due to the nature of my work, I have had the good fortune of travelling to most parts of Asia. Sheryl’s an avid traveller and adventurer herself! However, for a start, we will likely only focus on the trips that we have done together.

Anyway, enough of the background. Why Spain? Frankly, it was more or less a random choice that we decided upon. Both of us had never been to Europe prior to this, and we were looking at a list of countries to visit. Coming from Singapore, the list included the popular ones like France and Italy. I had sufficient air miles to redeem for most of the flights to Europe, and initially tried France and Italy. As luck would have it, the flights to these countries were fully redeemed as far back as December 2013. We had some other countries in mind, such as Switzerland, which were available as well. Spain was also one of the countries on the list, and it somehow appealed to me. A part of us were a little sceptical before the trip, we simply just don’t hear much about Spain from our friends in Singapore.

Either way, we went ahead and booked the tickets at the end of last year, on December 30 to be exact. We will be flying into Barcelona, and flying out of Madrid.Now comes the part that most people (sometimes myself as well) dislike: planning the itinerary.

Although we booked the tickets way back, we did not start planning the itinerary till May this year! Both of us were just so caught up in our work and daily lives that we kept delaying it. Until May, when we both realized we’re 1 month away from our trip, and have nothing planned. No lodging, no idea which cities we were even going to visit between Barcelona and Madrid, much less what to even do while we were there!

We tend to use Evernote for our trip planning, largely because it allows us to simply dump the information there in a highly unstructured manner, which I can then simply search through. Many of the other trip planning web services we have tried are too structured for our liking: We need to key in the time of the activity, etc. It may work for some people, but it is just not our style of travelling to stick so strictly to a timeline.

There’s no hard rule to how Evernote should be used. In our case, I simply create a new notebook for each trip, and everything related to the trip (air tickets, train tickets, lodging confirmations, etc.) will be added to the notebook as notes. The actual itinerary is just another note. The notebook is also shared with Sheryl so we can both contribute to it. For a better idea of what I mean, here’s a screenshot: 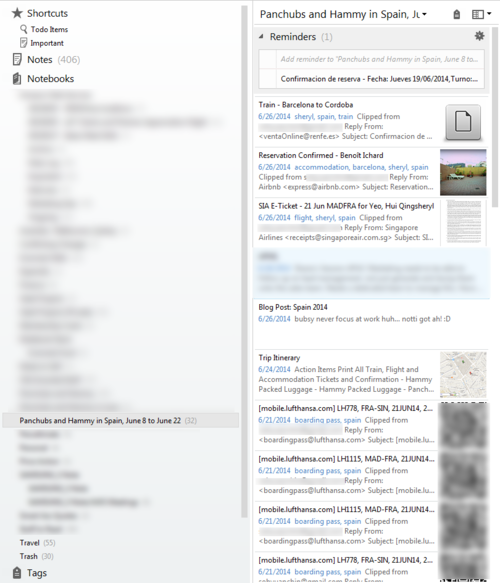 As you can see, there’s a notebook for the trip, with a bunch of notes on the right. To assist with the clipping of notes from Gmail directly to Evernote, I make use of Powerbot.

Back to how we planned the itinerary, we started searching on the different cities in Spain and dumping whatever appealed to us in Madrid. We dump everything, from potential places to visit, to train ticket information, to lodging. Of course, we also clean up the data every now and then, and refine it as we move along, or else it will end up looking like a huge mess!

For lodging, we are fans of Airbnb and highly recommend you to try it if you haven’t already! The prices there are much lower than hotels, the places are often unique (as you will see in our later posts), and the hosts are almost always very helpful and can help you get started in the city.

We finally decided on the cities after much debate, and they were:

We also decided to use the train to travel from city to city. Instead of booking using Rail Europe, I highly suggest booking with RENFE directly. It tends to be much cheaper, and you get your tickets for printing immediately. The website is not very consistent with the language though, and you may run into some Spanish even when on the English site. Thankfully, there are lots of guides out there such as this and this.

Phew! This turned out to be a much longer post than I expected, I hope the somewhat geeky sections on Evernote and the other tools are helpful! For the next update, we will be covering our itinerary and favourite parts of Barcelona! 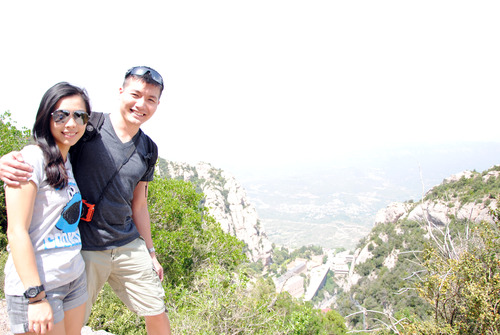 Taken during our Sant Jeroni hike in Montserrat.