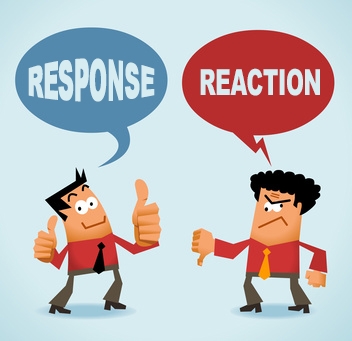 A close friend of mine once shared this with me. He had lost some of his personal belongings while travelling, so he phoned his then-girlfriend. The reaction he got was something along the lines of:

At the same time, he had also informed some of his closer friends, and some of them responded by:

I have no doubt that everyone was equally concerned for my friend, regardless of what they have said to him. However, at that point in time, being critical was probably unnecessary, and perhaps even detrimental to the current situation. If we all just take some time to think, we’d realize how stupid our reactions are most of the time. Using the same example:

Many times in life, I’ve reacted instead of responded. And I regret almost all of the times that I have reacted. Nowadays I try to take a few moments to think before acting. Sometimes there isn’t even a need to have any action, because I’d realize that my initial reaction was a very selfish expectation in the first place. Non-action is also an action. “Few moments” is again a very vague term. To put things in more concrete terms, I’d say that it’d be best not to react as long as you feel any bit of anger. I tend to ask myself these questions:

As long as one of the answers is “yes”, I try to remain silent instead. Sometimes being plain honest works the best. Perhaps you can even let the other party know that you’re not feeling comfortable enough to discuss matters at the moment. Sometimes the other party ends up reacting, but if you are able to maintain your cool, my experience has taught me that the matter will eventually be resolved in a peaceful manner.

There’s been numerous posts written on responding versus reacting, I hope my little addition to the existing posts helps in whatever tiny ways possible.

The above image was taken from Quessity from an article about responding vs reacting as well.

This post has been in draft for way too long, I decided to finish writing it and post it anyway :). #keepwriting